It had been 6 months since the accident, 192 days to be precise. Yes. I was counting. Still am. I know counting does not speed up the road to recovery; Counting down or counting up to a specific day. I know there is not ONE DAY that things would change for the better. It has been and will be gradual. Some days will bring big changes. And then there might be weeks of disconcerting lull.

They say, “a watched pot never boils.” But I want to watch this damn pot constantly. Watch every move. Every ripple it makes. Every puff of steam it lets out. Hawk eyes on you, you damn pot! Because if I can’t stay one step ahead of you, I am going to make sure I am walking right alongside you.

And counting days makes me gauge his progress better. I want to respect, admire and capture every little progress Jitish makes. And I am not letting another cold, cough, or infection get in the way of his progress after the brain injury. I feel out of control. With no control over him, the progress or the situation.

My sister reminds me, often, that this is not a sprint. It is a marathon! Slow. And very steady! I look at the imaginary goalpost that we both are heading toward. I hope it leads to a victorious celebration.

But there are days that come by, even if I try hard not to, when I feel completely defeated.

We have spent a lifetime in hospital rooms. We went from the UW Madison Neuro ICU to Lifecare Hospitals, and then from RIC to Neuro Restorative. At every facility we went, I dreamed that Jitish would walk out on his two feet toward home. I have spoken to Doctors, psychologists, behavioral analysts and social service coordinators that support the positive effect that being home has on recovery. But he needed intense rehabilitation that I couldn’t offer at home, at the time. It wasn’t time yet.

So we moved to Neuro Restorative. However, He didn’t take to the rehabilitation facility. He hated it! He suffers from severe Aphasia and Apraxia. So his communication skills were close to wiped out. In intense moments of anger and despair, he would piece together words appropriately. Triggered by intense emotion. He would plead and beg me to take him home with me. “Go with you”. “Go along with you.” My heart broke every single time. The visiting hours at NR were 4 to 9pm and I just couldn’t leave him. He would look at me and ask me to stay. He would scoot on his bed to make space for me. I will never forgive myself for leaving him there every night. Sometimes I would wait for him to fall asleep and then leave. Other days I would make very weak ruses. “you sleep. I need to go to the bathroom and I will come back.” and he would go, “ok, I am waiting.” I hated myself. Hated that I could walk and think. That I had to go to work when he couldn’t. Going to work felt like leisure. Guilt.

They said his anger would subside and he would get used to the place in a few weeks. In theory, the facility was great. Operating from a house, to make it close to home. His own room. Windows. I got a plant for the room. A Peace Lily. Pinned up our pictures on the walls. A living room with a Barcalounger (he always loved it. and wanted to invest in buying one for our new home).

He still hated it. He acted out a lot. Anger. Physical rebellion. It only kept escalating.  Most times, his behavior was understandable. He hated being pushed around. Hated orders. With brain injury, there is a complete loss of control for the survivor. They want to make some sense of what they are going through. And so they seek control. They want some power back. And no one really likes to be ordered around. He was put on many anti-agitation, anti-psychotic medications (Haldol, Ativan). These only pissed him off further. Haldol in particular has a paradoxical effect on him. Ativan worked. But merely a temporary fix. Not anger management. He needed a gentler touch. And being at Neuro Restorative just did not work. I wanted to make sure I was making the right decision and so I scheduled doctors appointments, psychiatrist appointments. It was hard to decide. The decision would have lasting and irreversible effects. It was the opinion of his psychologist to move home. She took him off some anti-psychotics. Especially Haldol and Ativan. His podiatrist agreed. Took him off coumadin (warfarin) as his blood clots could possibly have healed. It was time he headed home!

On the 11th of November, Jitish was discharged for home. Long due. Much awaited. Celebrations. 11th of November. Diwali. The Hindu festival of lights. Symbolic. Diwali spiritually signifies victory of light over darkness, knowledge over ignorance, good over evil, and hope over despair. Mythologically, Hindus celebrate Diwali in honor of the return of Lord Rama, his wife Sita and his brother Lakshmana from exile of 14 years. Symbolic. That he happened to be returning home on this date. I couldn’t help but feel positive; that the universe was sending a sign that things would look up from now.

He knew we were moving home. He was glad to be out of and done with Neuro Restorative. He woke up early that day and took a bath without qualms. He always went through fits of yelling and screaming during a bath. But not this time. He was dressed and ready to leave when I arrived at 7 am. The drive from Chicago to Beloit was not particularly difficult or fun. We were home. He was exhausted and wanted to go straight to sleep. I think he wanted to make sure we weren’t going from one facility to another. The hospital bed at home didn’t look inviting to him and seemed to confuse him about whether we were home. Also, nothing about this apartment reminded him of our home in Janesville. It was new. Not lived in. We had made a few trips from NR to Beloit before his discharge to make sure he starts developing a familiarly with this apartment. This had to be home. For now.

I had fixed the house up to code. Grab bars. Hospital bed. A welcome home tassel. Stocked up kitchen. My good friends, Megan and Katie, helped set up the house. Ikea nightmare. I can’t thank them enough for the support they have given me. 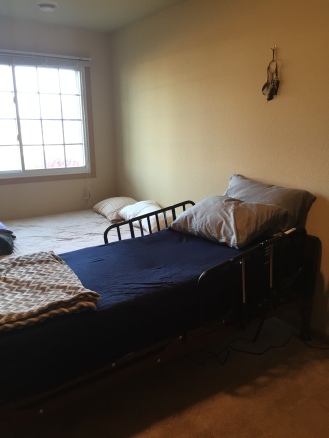 He had a restless sleep that night. Woke up at 3 am and started screaming. Insisted on going outside. Very irritable and lost. But we had to manage his temper calmly and patiently. The day rolled by and toward the evening he started to get calm. Realizing that this was home and that we didn’t intend on leaving him there alone, he felt at ease. I was playing some music and cooking and he seemed to remember some old Hindi Bollywood songs and sang along. It was a nice evening. After a very very long time.

We were just ready to go to sleep when I decided to moisturize his feet. Just as soon as I lifted his right leg to take off his sock, I could sense that it felt heavy and swollen. I swiftly took off his sock, just to realize that his entire right leg was swollen and tight. I rushed to take his temperature. 99.4 Celsius. Without another doubt in my mind, I got our coats out and mapped directions to the Beloit Hospital Emergency Room. Jitish sensed the panic in my voice. I tried to stay as calm as I could. But my heart was pounding in my chest. I felt sick. I felt that something was wrong. We were ten minutes away from the Beloit Hospital ER and we rushed in. He was the most patient and understanding at that time. He stayed calm. It felt as if he was reassuring me that everything would be alright.

After an incredibly long wait at the ER, tempers rising, we were told that he might have a severe blood clot and potentially a deep vein thrombosis – DVT. He should never have gotten off his blood thinners and needed to get back on them right away! All the while I kept thinking of moving to UW Madison. But it was 40 minutes away. Was it safe from him to move? I didn’t know. But I wanted to move to UW Madison. Now! We would be safe there. Taken care of.By Doctors we knew and trusted. And so I requested a transfer. Asap. But that very day, UW Madison was overbooked with a long waiting list. We were not going to give up! And so I called everyone I knew. His neurosurgeon, the neuro consultant, his primary care nurse, social service workers, the front desk, and every other number I could call. We spent 20 hours at the Beloit Memorial hospital. Counting down minutes. Hours. I bugged every nurse to get updates on the transfer. Finally the call came. The ambulance was on its way. We got in. Little relief!

And then, just like that, in a day, we were back at the hospital. He looked so dejected and afraid. I couldn’t even console him. I was terrified myself and he could see right through me. I joked. Laughed. Goofed around. As much as I could. And for that moment, he would smile and laugh. But then the gloom would settle back down.

I kept the words of Dr. Medow in my mind and the prayers that my father, mother and sister taught me. For strength. To do the right thing.